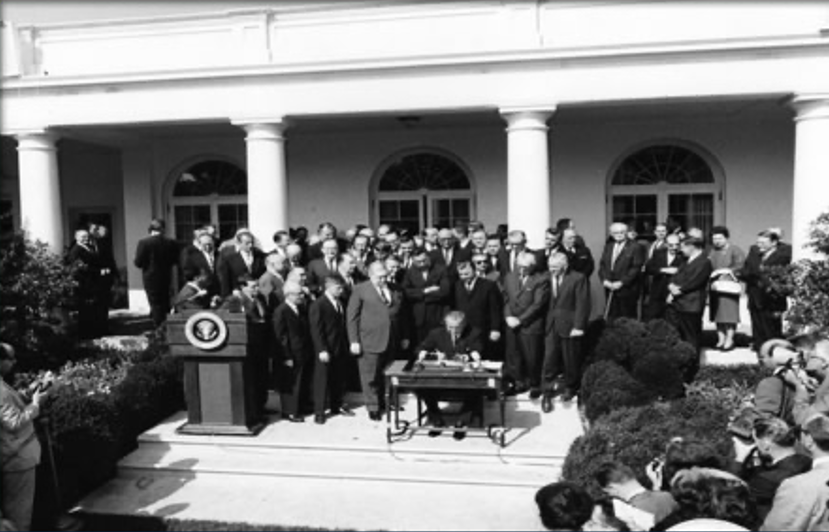 In 1964, The Great Society, as envisioned by President Lyndon Johnson, was a sweeping plan to improve the lives of all Americans, regardless of their circumstances. Inspired by President Kennedy and his New Frontier, Johnson pledged to fulfill his promise of equal opportunity for all by enacting several comprehensive changes within the federal government. In August of that same year, the Economic Opportunity Act was signed into law by President Johnson creating the nationwide Community Action Network.

A Commitment to Defeat Poverty

In 1963, shortly before he was assassinated, President Kennedy had asked his economic advisors to draw up some proposals to address the problem of American poverty. Johnson took up this charge after he succeeded Kennedy as President. In Johnson’s first State of the Union address in 1964, he called for an unconditional war to defeat poverty. He developed the Economic Opportunity Act of 1964. The act included a variety of initiatives:

CAPS turned out to be the most controversial part of the package, as it proposed the “maximum feasible participation” by impoverished people themselves to determine what would help them the most. CAPS were a radical departure from how government had run most social reform programs in the past.

Today, we continue to work side by side with people to identify the best pathway forward.

CAAs are required to have a tripartite board consisting of equal parts of local private sector, public sector, and low-income community representatives. This structure brings together community leaders from each of these groups to collaborate on developing responses to local needs. This allows for Maximum Feasible Participation in both the creation and administration of Community Action programs.

The CAA network is one of the largest users of volunteer services in the country.

LEVERAGE FOR OTHER RESOURCES

CSBG funds give CAAs the flexibility to design programs that address needs specific to individuals and the local community and to identify specialized resources that fit these needs.

CAAs have very low administrative overhead costs (on average, between 7 and 12 percent). Resources are invested directly in the community and families.

CAAs respond quickly when a family or individual is in crisis to avoid costly long-term problems.  The highest priority is placed on helping people achieve permanent self-sufficiency.  In addition to emergency assistance, a major portion of CSBG expenditures is for coordination among various programs.

CAAs provide services that address the full range of family needs – from Head Start and other education and child development programs, to youth and adult employment and training, to services for seniors and the frail elderly. Services are generally coordinated through a case manager or family development specialist. Other CAA programs are designed to strengthen the local economy and develop the community’s infrastructure under the guidance of community leaders.

CAAs provide services to more than a quarter of all Americans living in poverty and to several million more families with incomes only slightly higher than the poverty threshold every year.